10 Signs he loves you - Girls should know

By Moh Ghufron 9:48 PM Post a Comment
If the feeling is not delivered, it is not going unnoticed. Sometimes you can only guess that he loves you or not. Not just on the issue of romance, but also friendship. Now, lest you misunderstand in a relationship, either with a friend or boyfriend, you should know the signs that he love you. Here are 10 signs he loves you:

1. He's willing to take you to the house, though not in the same direction. Even long distances also didn't stop to bring you home. No need to until the house, at least until you're safe, and get the most convenient public transport.

2. He would eat together with you. Although he did not like the food and the atmosphere of the place, he still tried. If he tried to like the food, it was a better value.

3. Anytime he always had free time for you. Eg after work or college, he would invite you to meet. For him, your existence is very important.

4. Your problem, it means his problem too. Although the problems that you experienced very heavy, he was still struggling and want to help you. If it is fixed and can not help anything, he would still be at your side. 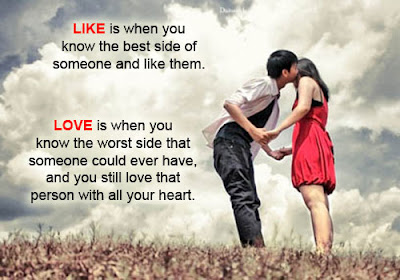 5. You'll feel fine when you're a lot of talks. He will not protest, or bored with whatever topic you're talking about. So also with him who will not hesitate to discuss anything with you.

(Read also: Signs he is a playboy).

6. The person who love you will try to make you happy.

7. Not everyone is being nice to you, he means to love you. So you have to be sensitive to his movements. Did he actually bore with the topic of your conversation? Or worse, he was tired of seeing you. It could be he's just trying to be nice to everyone.

(Read also: Signs he had an affair).

8. The person who love you will always think you're a good person. He will appreciate every decision you make. Regardless of right or wrong.

9. The man who dislike your behavior or personality, he will always think you're wrong. So, if it's like that, whatever you do will always wrong in his eyes. Yes, you should be patient. After all, you did not mean to hurt him.

10. The man who like you will tend to love and pamper you. No matter how much you eat, or how tired he was with you. He will always be with you.

Well, that's 10 signs that he love you. If there was no visible sign, then indeed He has nothing feeling to you. Or also, he did not want to be friends with you. A relationship can not get enforced, try to understand and appreciate his feelings.