By Moh Ghufron 1:31 PM Post a Comment
Facebook founder and CEO Mark Zuckerberg officially became a father of a baby girl born from the womb of his wife, Priscilla Chan. The baby girl was born with a weight of 3.4 kilograms and was named Maxima Chan Zuckerberg call, Max. Zuckerberg announced the birth of his first daughter on Tuesday (12/1/2015) San Francisco time zone.

To welcome the birth of his daughter, Zuckerberg wrote a long letter he published on his facebook account on 1 December 2015. The content of posts among others pledges to donate 99% of their shares on Facebook to help increase human potential and promote equality.

The news of his daughter's birth dan his letter attracted the attention of many people. Until Wednesday, as many as 823 million people like the letter and share up to 131 million times. But, how exactly the trip and the love story of Zuckerberg and Priscilla until they have children? Here are five interesting facts about the love story of Mark Zuckerberg & Priscilla Chan: 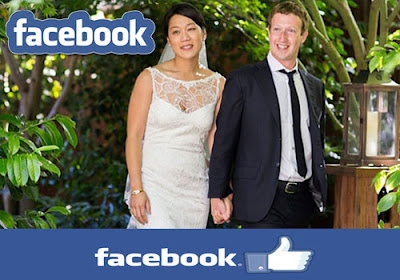 1. Zuckerberg and Priscilla's wedding vows on 19 May 2012. Both know each other since they were sitting in college. Mark and Chan first met when both were queuing for the bathroom in a Frat party at Harvard in 2003. Priscilla is a student from Boston who attended a party held by Alpha Epsilon Pi, an organization which was followed by Mark since college. Chan remembering her first impression about the meeting with Zuckerberg.


He was a nerd slightly alienated.
- She said in The New Yorker.
I remember him holding a glass of beer and threw the humor that only nerds or computer experts will understand.


2. Priscilla also listed as one of the first members of the social media Facebook were now the world's largest social media. Priscilla joined the Facebook users since February 5th, 2004. When first dating, Zuckerberg said on Priscilla,


I prefer going out with you rather than completing the midterm tests were taken to the house.
- Said Priscilla on Today's.


3. In a photo uploaded by Zuckerberg on October 19, 2006, looks a compliment delivered by Priscilla to Zuckerberg. This apparent communication may be one sign of their love runs long enough. In the post, look photo Zuckerberg's face and his clothes were wearing black gray jackets knit material. Priscilla looks to comment on the photo and confirms there is a special period in the style of her husband's clothes.

4. They had to undergo a long distance relationship when Zuckerberg started raising Facebook. Meanwhile, Priscilla studying at Harvard, Cambridge. When she graduated, Priscilla joined moved to California. When together, they spend time with a walk in the park, paddle, and play board games. Because her boyfriend was too busy with Facebook, Priscilla made a rule that a minimum of a week they should be together for 100 minutes and a date out at least once.

5. They began living together since 2010 and married in a simple in his yard in Palo Alto, California, on May 19, 2012. The wedding was a surprise all guests. That's because the guests thought that the event is a celebration Medical School graduation undertaken by Priscilla. Now, Priscilla has a nickname as the First Lady of Facebook. A couple of billionaires is still known as a generous couple with the wealth they have.