By Moh Ghufron 1:35 PM Post a Comment
In the midst of infidelity and divorce, we are fortunate to get to see a true love story between Ronald Reagan and Nancy Reagan. In 1950, Nancy met with Ronald when she was working as an actress at MGM. Two years later they married and has two children; Patti and Ron. Since that time, they were always together for approximately 54 years until death does them part.

When Ronald Reagan announced that he suffered from Alzheimer's disease to the American people in 1994, the first thing he remembered was Nancy, his beloved wife.

I have been told by a doctor, that I am one of the millions of Americans who suffer from Alzheimer's disease. I only wish Nancy spared from this painful experience.
- He wrote, in a letter.


Nancy has focused all her life on Reagan during the last 40 years. The death of her husband put an end to what was once portrayed by actor Charlton Heston as the greatest love story in the history of the American presidency.

Ron (Reagan's nickname) and Nancy were active together as a Hollywood star when they first met. However, their date is entirely politically motivated.

As a 26-year-old actress, Nancy was surprised to find there was another Nancy Davis on a list of communist sympathizers. At that time, the actors, actresses, and even the Hollywood director were killed by the anti-communist wave that hit American soil. 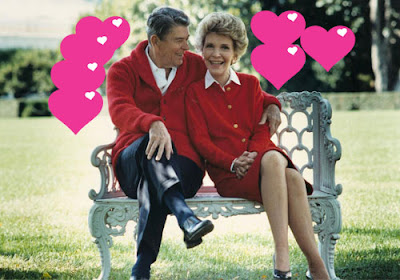 She knew Reagan - at that time head of the Screen Actors Guild (American film industry trade association) - very anticommunist. Reagan is helped out of trouble. Nancy then try to meet the actor.

Still in the process of divorce from actress Jane Wyman, who has two children, Reagan was willing to meet with Nancy. But he said that he could not meet until late at night because he had to work before dawn the next morning.

On the first date took place at 3 am. They plan to conduct the next meeting.

I don't know if it was love at first sight. What is clear, very beautiful.
- Nancy recalls.


Proposed in a restaurant

When Reagan said let's get married at a dinner at their favorite restaurant, Nancy just answered: All right. The couple ties the promise in a simple. A ceremony was held secretly on March 4, 1952, at the Little Brown Church, on the outskirts of Los Angeles. Patti Davis, their first daughter was born seven months later and Ron Jr. followed in 1958.

The movie star couple seemed to really enjoy the love life of the silver screen. Nancy always looked at him with eyes in awe. Stay tuned every word from the lips of her husband during his speech. Passion both clearly illustrated during the US presidential election campaign in 1980. Their kiss makes journalists enthralled.

We will step aside because we felt there was something very special, personal, and outstanding among them.
- Says a former NBC television correspondent who served in the White House.


At the White House, they always walk hand in. The romantic couple left a note full of affectionate words at their residences, each celebrating the wedding anniversary. One of Nancy's spokesperson once said: They never silent. They never stop seducing each other.

In her autobiography in 1989, My Turn, Nancy said ''all the romance was very real. Some journalists who write about me, thinking that our households romantic it were a farce. I reiterate, it is not an act.''

Unfortunately, their extraordinary closeness that damages the relationship with their children. None of their four children who are particularly close to their parents while in the White House.

According to an article in Vanity Fair in 1998, Nancy closest to Maureen (Reagan's daughter from marriage to Jane Wyman). Michael - the adopted son of the marriage - and two children (Reagan with Nancy), touted contentiously and felt estranged from the family. When their children know the father of disease diagnosis, they are vying to be closely around their parent.

However, an exemplary household for all Americans was ever under fire. A biography of Nancy, written by Kitty Kelley in 1991, among others alleged that Nancy ever scandal affair with Frank Sinatra. According to the book, Nancy invited Sinatra to the White House for a luncheon that lasts longer and ordered that the staff did not disturb them.

Nancy is also accused of having too much influence on her husband during the campaign (a common criticism received by the mother country). The couple is also undesirable because too believe in horoscopes.

A former White House aide confirms, a prediction about the president forcing Nancy to change the time a number of events have been scheduled, canceled trips, and restrict activities outside the White House.

When Reagan slowly lose memory, Nancy became much more protective than ever before. She did what she calls a long farewell Ronald Reagan. In the early days of the disease attack, Nancy planned daily schedule to keep the former president to keep them busy and fit.

She invites Reagan out of the house for a few hours every day and be the protective image. She banned all event photos.

She told Vanity Fair in 1998: Our relationship is very special. We loved each other, and until today. When I say my life began together with Ronnie, it's true. I can not imagine life without him.

With the passing of her beloved husband, Nancy seemed forced to adapt to live life without the man who had been an idol, as well as the leader.