By Moh Ghufron 9:00 PM Post a Comment
Break up with someone who we care about is tough. Maybe it's not only you who can not forget your ex-boyfriend, but he could feel the same way.

After keeping a distance for some time, but did not expect that he's back close to you. Of course, he has a particular purpose to you. As summarized from Madame Noire, these four reasons why do men always come back after a break up:

When a man tried to close with his ex-girlfriend, it does not mean that he took advantage of you. Maybe he felt the emptiness without your presence, and he really felt guilty about past events. There is no harm in giving him a chance, but you still have to see the extent to which his changes. 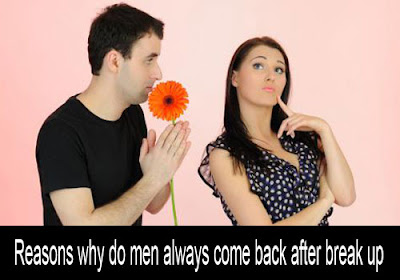 3. He knew that you would accept him again

Although you have declared a breakup with your ex-boyfriend, you still let him call you as ''dear'' or ''honey''. You did not resist when he seduce you. Gladly you also accept him again. Think carefully if you want to return to the arms of your ex-boyfriend. Maybe he can change, but only for the first month. Afterward, he might come back acting up, because he knows that you will surely receive him again.

4. You have been to continue living

When you're comfortable with your current life or has found a new boyfriend, the man seemed to have a radar that makes his ego snapped. It could make him confused and anxious because you have been able to continue living without him. Feelings do not receive it makes him trying to get back closer to you and win you again.