Does Justin Bieber still keep his love for Selena Gomez?

By Moh Ghufron 9:21 PM Post a Comment
The relationship between artist star Justin Bieber and Selena Gomez is already come to an end several years ago. But through a tattoo of Selena Gomez in his left hand, it proves that his love for Selena Gomez not be discharged.

As quoted from AceShowbiz on Tuesday (March 1, 2016) about Justin Bieber and Selena Gomez latest news. Ahead of his birthday on March 1, Madame Tussauds Las Vegas at the Venetian launched a new wax statue of the singer ''What Do You Mean?'' complete with tattoos on his body. Through the tattoo, people become aware of the love Justin Bieber to Selena Gomez. In the wax statue, Justin Bieber looks no shirt and wearing only silver chain necklace, brand Calvin Klein shorts, and black leather pants. 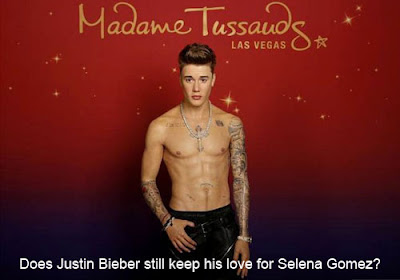 The 22-year-old singer justifies about a tattoo of Selena on his wrist. It makes people speculate that both are re-live relationships. However, recently Justin Bieber admits that he wants to change his tattoo in order not to look like an ex-lover.

''Hailey Baldwin and Justin Bieber have a very close relationship. They were also very close to their respective families and care deeply about each other'' the source said. ''They do not have status, but their relationship is very good.''

The reason someone is difficult to forget ex-lover
Love that exists for a long time to make the memories are so binding. Quite often, when the broke up is an option, all shadows of an ex-lover was difficult to disappear. Nothing separation is easy. There are a lot of memories when someone split up with an ex-lover, ranging from favorite song to favorite dating place. Of course, it's hard to forget an ex-lover in one night.

A recent study by Friends Reunited (social networking site) shows many of us can not forget ex-girlfriends for granted. In fact, approximately 21.6 million British people still keep photos of their ex-lovers or partners. In the case above, Justin Bieber makes a tattoo of Selena Gomez.

Women are more sentimental than men. About 61 percent of women claimed that they still keep photos of their ex-lovers because they do not want to forget the memories of the past. While only about 50 percent of men who still keep photos of their ex-lovers. But most men, they save more feelings than women. They also like to keep secret from their partner.

One in five men (20 percent) were still in touch today, they still save and hide pictures of their ex-lovers. However, they are afraid of the image is found by their current lovers. While only nine percent of women who do it. Men also seem to have more of a burden in their hearts. Approximately 17 percent of men say that they sometimes feel guilty because they still keep pictures of their ex-lovers while women only 11 percent.

Here are the reasons someone still keeps photos of their ex-lovers: