4 Big questions about your relationship

Continuing a relationship or end, it's not like turning the palm of the hand. Hesitant and indecisive to continue the relationship or end it, of course, requires a process of careful thought and consideration is quite complicated. It becomes your task to find out consideration as to what you should do. There are four questions and things that you should do to be able to consider your relationship enough to be here or whether it can still be continued by asking yourself first, as summarized She Knows, among others:

Problems in a relationship, of course, preceded by of one of the partner. This can lead to disputes and quarrels in your relationship. When the chaos of relationships caused by him, then to fix it would have on the goodwill of your lover. So, when he does not feel apologetic and do not apologize, you should think more. Not only thinking about his attitude but also, think about whether you have a fault with him until he acts like that? It can be a basic reference for you to consider in making a decision later. 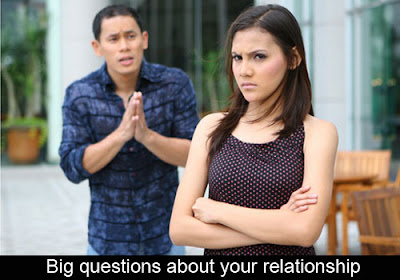 All forms of speech that are not followed by an action would only be a big hoax. Apologizing is a must, but he also needs to take responsibility for his actions. Not that he was just saying remorse and apology. He also had to admit his actions. Admitting mistakes are the gentle attitude that you need to see from a man. So, whether he had admitted his guilt and want to be responsible? Responsible for the act is important because early on you can see how the character responsible for yourself later.

3. Does he understand why you are angry?

The attitude of anger is an expression that is natural in a relationship as long as the order appropriately. Apologized but just on the lips and do not understand why you're angry, it's also not a solution. He must really know his mistakes and why you became angry with him. Remember, when he just speechless sweet by trying to kiss you and gestures that lead to sexual acts, believe me, he did not really regret his attitude and you'll get hurt again in the future. If you are a good partner, you'll be able to know the attitude of how you have to do to let him know that you are angry with him.

A question like this is a most important question in consideration that later resulted in the decision to be taken by you. This is the main question you need to ask yourself before making a decision to give him a second chance. If your answer is ''Yes', you can find ways to rebuild trust. If your answer is ''No'', then you know that this is the point where you have to release him without fear of loneliness. Sometimes, for some women, loneliness became frightened of its own. But realize better be single than to maintain a relationship that is bad and unhealthy. Old or not a relationship is not a means of measuring the quality of a good relationship by someone, but by how you and your partner can solve a problem. For example, it is a form of love that has responses between you and him.