By Moh Ghufron 11:46 AM Post a Comment
In a relationship with a female idol or when after a man who had just gone together with his lover, of course, he will appear as perfect as possible in front of you. Both in terms of appearance, speech, and any bad habits like lost in the earth when he is with you. But the most common thing that happens in a relationship that has existed in the time it started growing old or old. Where he might not be awkward and embarrassed anymore with you, of course, you do not like it so it can make you feel upset and can trigger an altercation with your partner. Do you agree with that? Here are some things that become habits of men who often make you feel irritated, as summarized from the All Women Stalk, among others:

In general, men are very astute to pretend if you're scolded him or give him an advice, and worse, it turns out what is your complaint against his attitude only 'sign in the right ear and out the left ear. Your anger or your advice would just be an empty story alone. After you have finished talking, he tends to forget what had just delivered. To prevent this, do not talk in a hurry and ask him to repeat what is being said by you after you have finished speaking. If that does not work, send SMS or BBM that its contents reminded him of your words implicitly. No less importantly, you'll have to understand the character of him. It took appropriate communication to deal with him so that when you are angry or give him an advice, he did not become a person who stubbornly.

In general, most men can not keep clean, both in terms of appearance or in terms of cleanliness. Starting from the irregular bathing habits until a messy room or car, of course, it will be a thing that sucks for you. To prevent this, write a list of things to be done by him include a bath regularly and tidied the room or car. It certainly sometimes makes you feel uncomfortable. Things to do in dealing with the habits of the men like these, for example by always paying attention. Both of cleanliness or tidiness is on him. 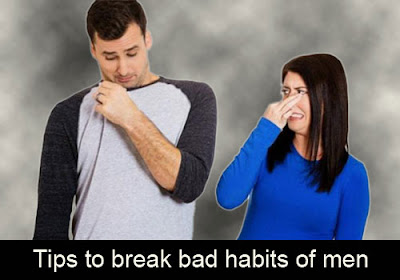 It thus certainly often makes you irritated, especially when you already have a plan like watching a movie, dinner, or anything else that has a target time. Especially also, when you're dressing up and he was not on time. Eventually, your makeup becomes faded. If your lover is one of them, outsmarted by a little lie to him about what time the event starts. For example, if the party will begin at 07:00 pm told him that inside written invitation event starts at 06:30 pm. So that later he would be accustomed to in time, provided that you do not forget to insert the words ''Be careful on the way darling''.

Most women, of course, have a sharp memory to a day of celebration, commemoration, or what is considered to have to mean. Such as anniversaries, birthdays, Valentine's Day or any other day that has particular significance. On the contrary, most men have less memory on those days. The most effective thing what you can do rather than upset because he did not give a gift in a special day, the better you start to enter important dates on his calendar cell phone. That way he'll get used to remembering important moments.