5 Important things before you get acquainted with woman

By Moh Ghufron 9:19 PM Post a Comment
Get acquainted with the woman, whether intentional or not certainly be something that can be happy for the men. Especially if the woman's appearance so grab your attention. Charm, face, and body shape are common indicators that are often overlooked by men. The first impression largely determines continuation of the relationship between men and women. Either that introduction will continue to be a romance, a friendship or even hostility.

For women, there are five things that most of their attention when just acquaintance with a man. Surely you as a man who wants to conquer the woman of your idol. According to Dr. Gordon Patzer, author of ''Looks: Why They Matter More Than You Ever Imagined'', many women are able to recognize whether the man is suitable for her or not in just a few minutes by watching their appearance. Five things below, of course, you should know before meeting with your idol woman because it often becomes a consideration for a woman to receive you.

In this case, the physical or body shape is the part that attracted the attention of women. In most women, the physical is the main thing for them when just met the man. Height and ideal weight are another things that are the next factor to be taken by the woman when she first saw him, and generally, they chose the man who was tall and big. ''Men who are overweight or small will soon be unattractive to women and generally closes the opportunity to get acquainted with him further'' said Dr. Patzer, as quoted by the Times of India. Personality is usually a factor number two, that is when the woman began to know more closely with these men. It becomes a relative thing, so you do not need to feel inferior to conquer your idol woman. 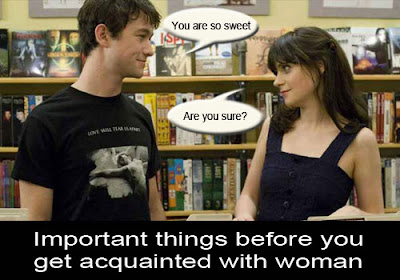 In general, on average, women will pay attention to a man the way he did his hair, clothes, groomed or not, as well as body hygiene (teeth clean, free of body odor). Which women who would like to linger and interested in approaching the man wearing shabby clothes, unkempt hair and body odor? At least at the first meeting, these factors are most considered by women.

After considering the physical and appearance, women will usually notice how men smiled. ''The smile on a few minutes after the meeting, meaning that the man sent a signal that he is welcome to know more closely to women'' said Dr. Patzer. Not a smile that showed all the teeth, but a friendly smile.

Generally, women like the man who can dilute the atmosphere with a sense of humor and clever jokes. The ability to make a woman laugh is the main attraction which is owned by men. Women will be faster close with a cheerful and pleasant man.

A confident man will be seen attractive to women. According to Dr. Sameer Malhotea, head of psychiatry and psychotherapy at the Fortis Hospital, New Delhi, India, said that the first few minutes of meetings, women will not only assess the level of the confidence of a man. But also, pay attention to innate properties and how the man thought. Also according to Dr. Gordon Patzer, ''Women will identify how smart a man determine the attitude and how he looks at things in a positive way''. But the haughty and arrogant nature is not something that can be classified as confident.