Love Story : A best-selling romance novel of all time

By Moh Ghufron 9:14 PM Post a Comment
Love Story is a romance novel work of an American author, Erich Segal. This novel was published in 1979. Initially, Segal wrote the screenplay for the film Love Story and then approved for production by Paramount Pictures. Paramount Pictures ask Segal in order to adapt the story in the form of a novel, as a sort of preview for a film. This novel was released on February 14, 1970, or precisely on Valentine's Day. Unexpectedly, Love Story became a best-selling work of fiction in 1970 in the United States, and Love Story translated into more than 20 languages. This novel to survive in the top spot for 41 weeks in the list of best-selling books in the New York Times, reaching the top position. A sequel, Oliver's story, published in 1977. As for the film Love Story was released on December 16, 1970.

This novel tells the story of romantic love and funny, but also tragic. This is a story about two young people graduated from college. They are desperate to maintain their love even in the face many obstacles. Oliver Barrett IV, a Harvard athlete, and heir Barrett family were very wealthy, and Jennifer Cavilleri, the daughter of a baker in the city of Rhode Island. Oliver (Ollie) prepared to follow the great trail of his father. Meanwhile, Jennifer (Jenny), studied music at Radcliffe College and plans to study in Paris. Comes from a very different world, Oliver and Jenny each other immediately attracted to each other and their love deepened. The Story of Jenny and Ollie is a realistic story of two young people who come from two different worlds but eventually converge. 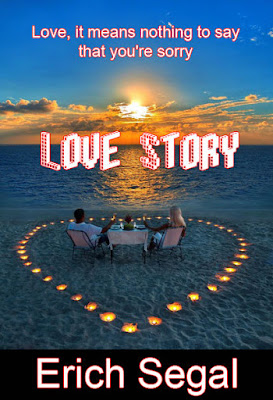 After graduating from college, they both decided to get married and against the wishes of Oliver's father, who then decided to end the relationship with his son. Without the financial support of his father, they struggled to refinance Oliver through Harvard Law School. Oliver graduated with the third rank in his class and got a job at a law firm in New York city. Meanwhile, Jenny worked as a private school teacher. Jenny promised that she would follow Oliver anywhere. Finally, they moved to New York city. They want to spend more time together and not in work or study as before. With Oliver's new income, a married couple 24-years-old decided to have children. Then something surprising happened in their lives. After Jenny failed to conceive, they consult a specialist doctor. But after re-examination, the doctor told Oliver that Jenny was suffering from leukemia and she will soon die.

As instructed by the doctor, Oliver trying to undergo normal life without telling Jenny about her condition. But Jenny finally figured out about her illness. By counting down the days of their togetherness, Jenny started undergoing cancer therapy is expensive. Although income is passable, Oliver still not able to pay the hospital costs were enormous. In desperation, he sought financial help from his father. But Oliver did not tell his father what the money he would use. Meanwhile, at the hospital, Jenny spoke with her father about the funeral arrangements, and then ask to meet with Oliver. She told Oliver to stop blaming himself and asked him to hold her close before she died. When Mr. Barrett realized that Jenny was ill and that his son to borrow money for treatment of Jenny, he soon left for New York. By the time he reached the hospital, Jenny was dead. Mr. Barrett apologized to his son who replied with something said by Jenny to him, just before the last breath in the arms of Oliver:


Love, it means nothing to say that you're sorry.