5 Great questions when your partner is cheating

By Moh Ghufron 10:29 PM Post a Comment
Establishing a relationship of love with a man would be a happy thing for every individual especially by women. It is based therefore instinctively, women have a more sensitive soul when compared to men. As much as possible when a woman has had a male partner, of course, it has great upheavals to tell the world that she already have a partner who she loved. However, when a woman has dared to take a decision to enter into a relationship of love with a man, of course, she should know the risks inherent in her relationship, namely a broken heart. Broken heart or breakup certainly be caused by several factors. However, in most cases the romance that is around us, the most prominent thing that we can found where the end of a relationship with a partner, because one of partner already cheating with another person. Surely infidelity would be a risk when you decide to enter into a relationship with someone.

Probably for most people who have had experience when falling in love, infidelity issue had not become the new thing. But that does not mean that it is becoming something that is not important to know deeper. In most couples, when one of their partners are having an affair certainly choose to end their relationship. Maybe for you, when your partner is cheating, it is a very difficult thing for you to receive it. Moreover, your relationship has existed in the time period long enough. Heart pain that you can not take it anymore, it is a very reasonable burst of expression so it can be understood. The sense of dilemma after you know that your partner is cheating namely choose to end your relationship with him or give him a second chance to improve himself and re-establish trust against you. Because not infrequently in some cases of infidelity, it was still found where one of the partners gives a second chance to make their relationships can be corrected. Especially when the partner who cheated have to kneel down to apologize to you. 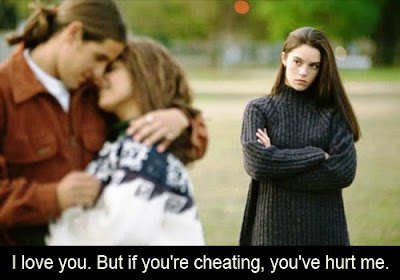 Based on the above, the first thing that you should take note namely trying to calm down and think clearly and quiet by asking your own feelings. Ask yourself certainly aimed to measure the quality of the relationship that has been established, of course, if you are one of a smart partner, you will ask ''what my shortcomings and mistakes that cause my partner having an affair with someone else?''. Because, not all couples are having an affair with another woman solely based on attractive looks, sex, or the charm of another woman. Infidelity may also be possible one of the partner is lacking in attention to their partner. After that, you then ask yourself firmly whether to give him a second chance or end the relationship between you and him. Here are five big questions that deserve to you know when one of partner is having an affair, as quoted from Dating Without Drama and Cosmopolitan, among others:

1) How his attitude after cheating?
Things like this certainly should you do when one of the partners having an affair with someone else. Does he show the attitude that he was sorry for cheating who he had done or he does not admit cheating manifestly correct and clear truths and then blame you for acts cheating that have him doing? From this, you can make an assessment of the attitude who he showed it to you. When he deeply regretted the action who he had done, of course, you can give forgiveness and a second chance not to repeat his actions again. But if the reverse, it turns out he actually demonstrate behaviors such as not confessed and then blame you, of course, you should not hesitate to take the decision to end your relationship with him.

2) How the intensity of cheating that he was done?
There are many couples who often repeat the same mistakes such as having an affair with someone else. If you are in this condition, you have to ask yourself, how many times he's having an affair with someone else during you in a relationship with him. Thus, later you will determine the intensity of cheating that he has done to you during this time. It is certainly very beneficial later on to be a consideration for you to come back to give him a chance the umpteenth time or end your relationship forever. However, if the first time he had an affair and showed attitude apologetic and even willing to do what you want, you should give him a chance to nurture your relationship into a better direction in order to obtain a healthy relationship quality and maximum.

3) Are you able to forget the past and give him trust?
A relationship of love must necessarily be based on the trust in each other because trust is the main foundation in a pioneering relationship which then will reap the results together. Things that you can do is be honest with your own conscience. The emergence of suspicions that comes every time when you are not with him, it is perfectly natural. But you have to come out with such thoughts. It is increasing plunges you into a person who constantly suspicious of your partner. The best way you do namely to convince yourself and ask your partner to reassure you that you are able to deal with any problems that arise. You should believe in sharing trust each other. In addition will improve the quality of the relationship together, of course, can make you stronger to face all odds with him.

4) Can you give him forgiveness?
Forgiving someone who previously you very love, but it turns out he let you down. Of course, it makes you hard to forgive him. Felt betrayed by him increasingly make you think that forgiveness is not an easy thing to do. Therefore, when a partner has been of apology to the partner who had an affair with another person, it means she forgive those mistakes and give him a chance to improve himself. In this condition, you need to do is to calm down. So that you will be able to think more cool and healthy in making decisions. Either give him a chance or end your relationship with him. When you've calmed down and turns the notion of betrayal is very hurt you, you should end your relationship with him as the best way.

5) What are the causes you quarrel with him?
The last thing that you can ask yourself when one partner is having an affair, that is by recalling the trip of your relationship when first got together. From there you able to know that if during this time he has a pleasant habit and your relationship during this goes well, maybe you can forgive infidelity that he had done. Mistakes that he was done could have been motivated by people who are jealous of your relationship. However, if you recall when you first got together and turned out at that time you already have a lot of mismatches so it often be the trigger you quarrel with him, you should end your relationship with him. It may be that the reason he was having an affair with someone else because this is reasonably likely to be separated from you. This indicates that you and him is not a person who can be put together, so it is important to think mature in establishing a relationship with him.