By Moh Ghufron 7:59 PM Post a Comment
Not easy to do facing any problems in the household, especially when you have to make tough decisions to get divorced from your husband. Plus you have a son who is still little or a pregnant child.

Live the life of a single parent is a challenge for any woman, especially when you have a son who is still little. So this is what you need to do to raise a child.

1) Talk about his father.
One time he would ask about his father, and not all mothers can answer this question easily. You need to explain in a way that is easy for him to understand. But not cover up reality. You need to saying something positive. But to be honest. As he getting older, explain the corresponding his ability to understand something.

2) Teach him to use the toilet.
When using the bathroom, men and women are different. Familiarize children to urinate like a man. When going to a public place such as a mall, escorted him into the men's room and tell the reason why his mother did not have to go into the.

3) Remember that he is not a head of the family.
Often the mother will make her son as a substitute father in financial terms. He should not be responsible for helping the head of household, let alone to make their work since childhood.

4) Give him a good role model become a male.
Ask uncle or grandfather gives an example as a man and what might, you can not do as a woman in giving examples. He needs to be familiar with sports activities and other activities that are masculine. 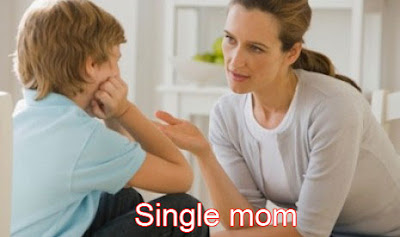 5) Show him how his mother was a strong woman.
You need to give an overview that the woman is not being weak. Especially when you have to raise your son alone. Give him the understanding that women can be as good as men and the need for him to respect women.

6) Familiarize to all the things about men.
Because he was born different gender with you, you also need to familiarize there is a lot of "boy stuff" at home. Watch Superman, Spiderman, Batman, play station, soccer and others. You certainly do not want your son to play dolls or Barbie at home, right?

Raising a son as a single parent must have its own difficulties. Make sure he does not lose the affection that he needs and the role of complete parent although different from other children.