Can we die because of broken heart?

By Moh Ghufron 12:28 PM Post a Comment
Can we die because of broken heart? Yes, it can. Here's a short story about love. Vera Guthrie is a woman who has been married to Tom for more than 65 years. Tom died six months earlier. According to her family, Vera suffered a broken heart after her beloved husband died. Based on the information the doctor, Vera died because of broken heart's aorta.

Marriage between Vera and Tom takes place during World War II. After the war, this couple lived in South Africa and then moved to Northern Rhodesia (now renamed Zambia), where they lived for 25 years. This couple then moved to Queensland, Australia in 1974. But some of their heart obviously still at the Africa. So they returned to Zambia and then move to Angola where Tom works in a diamond mine and they suffered a terrorist war. They eventually settled in Australia in 1983.

What is clear, Vera and Tom has inherited a love for the three children and six grandchildren. By family, neighbors and their friends, Vera and Tom is a partner-friendly and faithful to each other. Would not you want your life and your marriage is also remembered by others? 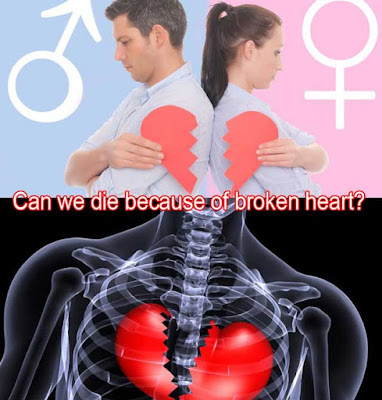 The explanation based on medical science
For those of you who just heartbroken, perhaps this could be a concern. For a study found seriously impact on a person with a broken heart or a broken love.

As reported by Newser, cases of death due to broken heart is rare. But according to Professor of Psychology at UC Davis, Karen Bales, loss of a spouse can cause increased heart rate, arrhythmia, anxiety and decreased cardiac function. She called broken heart syndrome.

The symptoms of broken heart syndrome are particularly vulnerable because it resembles a heart attack. Some cases even experience shortness of breath, angina or chest pain, poor blood circulation, arrhythmia (heart rhythm irregular) and a rapid heartbeat due a broken heart.
- she said.


Previously, researchers who have studied the case at the Johns Hopkins University School of Medicine estimates that only 1 to 2 percent of patients experienced a broken heart syndrome and died at the hospital. Other studies in Minneapolis found that heartbreak causes serious health problems, including Alzheimer disease, advanced cancer, and brain hemorrhage.

According to a review study in the American Journal of Medicine, broken heart syndrome causes other emotional shocks can trigger a car accident or a criminal act. In broken heart syndrome, the Mayo Clinic physicians also briefly surprised to see an electrocardiogram. They found there was heart freezing. But, symptoms may subside within a few days or weeks.