5 Ways to overcome the anger of a wife

By Moh Ghufron 1:16 PM Post a Comment
How to calm an angry wife? Here are tips to control yourself when angry wife and wife's temper anger. Undergoing a family life is not an easy task. Need a lot of patience. You have to understand two different personalities, two different human beings live together. It is impossible, they will think the same way. Likes and dislikes will never be the same. There will be an annoying situation. But the success of marriage lies in how we organize ourselves to be able to overcome this situation. In this short article, I will share with you some tips (for men) how to calm your wife is angry with indignation management tips.

Is your wife angry? Did she yell at you? Don't worry, it's very normal. Ask your father how many times your mother yelled at him. We all shouted. It is human nature. If she does not yell. This is a dangerous situation because it means she harbored emotions, which later will come out in different forms. Here are some tips for anger management or reduce an angry wife and how to control emotions for the husband. 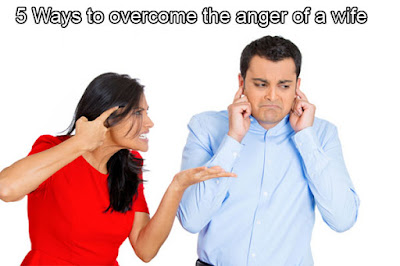 1) Cover your mouth and smile.
Are you emotionally strong enough to do this? When your wife starts yelling at you for something you never did or because of something you forget. Not yell back or argue back. Are you brave enough to smile at her? It sounds difficult, but it certainly can. You might think that it is stupid enough to do so. But if you can do that, you will make her feel that she so stupid to shout and her own mind will force him to calm down. Moreover, if she can make you angry. This means that she has control over your emotions. So control your nerves and smile at her when she shouted.

2) Admit mistakes wholeheartedly.
Everyone certainly ever making mistakes. Nobody in this world who has never made a mistake. Making a mistake is normal. However, admit mistakes is a very powerful action. She will also feel great when you admit your mistakes. But do not do it with self-deprecating way.

3) Listen.
She may yell at you because her boss in the office did not listen or her friends did not have time to listen to him. Many people in this world get depressed because no one as a place for her to share to listen to their problems. Think of it as a good deed and try to listen, when she shouted anger.

4) Recognizes herself.
This shows that you respect her. But this does not mean that you agree with her. If her indignation is triggered by someone else because maybe she thought that she getting injustice or because she lost control.

5) Go out.
If she is angry at you, you better go out for a walk and come back when she was "cool". But if her angry with others, you both better go out for a walk. Go for a refreshing and relaxing, at least, it helps her to feel calmer. Usually, women find it to be quieter if you tell her that you also feel what it was like there is someone else did wrong who made him angry (if she is wrong, this is not the right time to open her eyes to be her mistake). Or in other words, if she feels there is someone who supports her, she will feel calmer and her hormones will return to its normal state.

If the wife is angry, then the husband should try to resist the urge to be silent. Conversely, if the husband was angry, then the wife should strive to resist the urge to be silent. If you want to talk, wait some considerable time until your partner's emotions subside first. Because the so-called altercation is if the two are put out their anger, each answering one another and no one wants to budge.