Why we can fall in love?

By Moh Ghufron 11:31 AM Post a Comment
Falling in love is one of the most pleasant feeling in our lives, but the feeling is still a mystery to most people. Perhaps you ever ask, what makes people fall in love? Physical attraction of course is one of the answers to this question, but the word "sexy" has a different meaning for everyone. You may fall in love with someone who is jolly and crazy party, while your friend loves a shy bookworm. Different sexual attraction makes each person unique.

In the case of falling in love, we tend to choose the same type of person. For example, if you are wondering why you always fall in love with a dark-skinned people, or why your friends are always attracted to men who wear glasses? This may seem like a coincidence, but the fact is it is influenced by our sexual tendencies often associated with the memory of our childhood.

The late John Money, Ph.D., a psychologist from Johns Hopkins University has spawned the theory of "Map of Love". He said that our sexual tendencies rooted in past experience. In his research he concluded that the map of love is like a "template" that became the guiding force in our lives. For example, say you have experienced the love of monkeys with your first child next door neighbor and she had curly hair. Years later, you still always looking for the opposite sex who had curly hair. Or maybe your friends have always admired her teacher bald. Years later, she finally has a husband who is also bald! 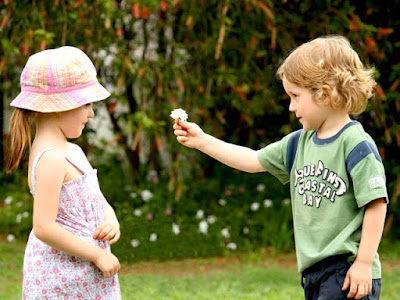 In addition to map physical love, we also have a map of love behavior. We will likely be interested in a "type", whether it is the type of bad boy, serious, or the class clown. Whatever your type, you will still be influenced by the experiences of your childhood. We tend to mimic the pattern of relationship that we see when we were kids, good relationship is healthy or not.

For example, a child who has an abusive father and often angry, often repeating the vicious cycle in their own relationship. He will choose a partner who frequent physical and non-physical violence. Growing up in a home filled with violence encourage children to associate love with pain, and many years later, these memories can trigger subconscious which makes them difficult to distinguish between healthy and unhealthy relationship.

All this experience will be a trigger that can be activated when you meet someone. Your brain will gather all the visual memory and make you fond of all that memory. Unconsciously, you will get into your love map where you can feel attracted to someone or not.

Even if you feel instant attraction, this does not necessarily mean you will fall in love. In fact, most people experience only "momentary lust"!

However, there are couples who say they really know they are destined to be together from the moment they first met each other. For people who believe in love at first sight, an instant attraction to someone more than just a momentary fascination. Many people who experienced it say that they feel connected just with the people, so intimate feel as if they know their partner before - and probably destined to meet since the day they were born. Have you experienced it?