By Moh Ghufron 9:14 AM Post a Comment
When we fall in love, there are many chemical elements are milling around the brain and body. The researchers studied about the influence of the chemical elements are when we fall in love and when we are in a long-term relationship. Of course!!! testosteron and estrogen hormone contribute in the onset of sexual desire. Without these hormones, we probably will never enter into the stage of "actual love-making".

The signs that appear when we fall in love include heart palpitations, flushed skin and sweaty palms. The researchers say this is caused by norepinephrine, dopamine and phenylethylamine we released our bodies. Dopamine is considered a "chemical happiness" that produce feeling of bliss. Norepinephrine is similar to adrenaline and the feeling of pounding. According to Helen Fisher, an anthropologist and researcher of love from Rutgers University, both of these chemicals produce elation, strong energy, difficulty sleeping, feeling of longing, loss of appetite and focused attention. She also said, "The human body releases chemicals in love only if certain conditions are met and ... men more readily produce it than women, because of their more visual nature." 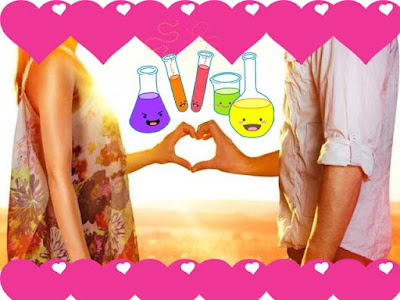 The researchers employed a functional magnetic resonance imaging (functional Magnetic Resonance Imaging / fMRI) to look at a person's brain when they saw photos of their loved ones. According to Helen Fisher, brain scans showed that the object of the research is undergoing a phase of interest is described as a stage where a person feel crazy and can not think of anything else other than the person their loves. The scans showed increased blood flow in brain regions with high concentrations of dopamine receptors - which are also associated with feeling of euphoria and addiction. High levels of dopamine are also associated with norepinephrine, which improve attention, short-term memory, hyperactivity, sleeplessness and behaviors oriented goals (in this case the goal of course "invented with loved ones"). In other words, people who are in love are often only focus on the love relationship and forget about other things.

Another explanation about the intense focus is also put forward by researchers at College London University. They found that people who are in love have lower levels of serotonin and also that neural network associated with the way we judge other in a state of distress. Lower serotonin level also owned by people with obsessive-compulsive disorder. This may explain why people who are in love to be "obsessed" about people their loves.