8 Ways a woman manipulates a man by her psychological complexes

By Moh Ghufron 2:15 PM Post a Comment
Manipulation is a type of psychological effects, used to achieve one-sided win by hidden motives of another to commit certain actions. Read also: Psychology of love and relationships between men and women.

The goal of manipulation is to achieve desired, not taking into account the interests of the other side.

Manipulation is characterized by:


Psychological complexes (or men's weaknesses, at which women play)

These thin strings of the human soul obediently respond to all the frets from the skillful touch of the master. When psychological complex triggered, the person becomes non-critical, begins to behave like a child, obedient to the will of another. Read also: Different psychological types of men in relationships.

Therefore, the impact on psychological complexes is the most effective means of manipulating people. It is no coincidence that it was said that the truth is not in the mouth of the speaker, but it is in the ears of the hearer.

Psycho-complexes are not much, but enough to manage people and to achieve your goals. Let's talk about the main of them in the context of the theme of s*xual relationships, how a woman manipulates a man:

Human fears are one of the most powerful and effective psychological complexes. They are often caused by poor awareness of human. So, if someone scares you of some mythical dangers and motivates you to do something to eliminate their, you must get information.
In the context of developing relationships, it is the fear of loneliness.

Protection against manipulation: a Man should be ready to lose a woman at any time. This is the only way he can retain control of the situation.

It is believed that a man should take care of the woman. Exactly so -abstract every man about every woman. And to this is added the fact that about his woman he should care especially diligently. This principle is not discussed it has been embedded long ago in the genetic code of our society.

Dear, do you love me? Well, then you owe me. The man owes woman that's the foundation of women's look at relationships with the opposite s*x. Moreover, what specifically man owe depends on current needs, desires and moods of women. This is one of a female strategic levers pressure on the reality of men, programming them to right behavior for female.

Guilt is one of the oldest elements of the manipulation on earth. It is used by all the religions of the world. Do You know the phrase: ''we are all sinners!''? Familiar? It means is necessary to go to confess or repent.
After repentance, you can be told, what you should do. Noticed? They tell you what to do! And speak as, if you need in this yourself. At all times the Church has used guilt as a reliable control for actions of the people. 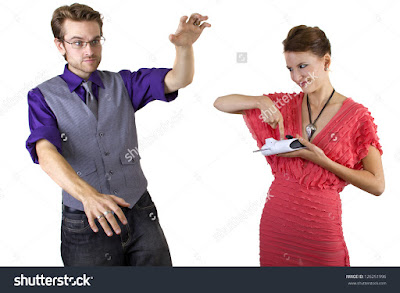 In interpersonal relations, this manipulation works very simply. One person blames the other for their problems. Then more emotional, than better. So that manipulation worked, the second person should feel responsible for the emotional state of the first. This condition can be easily done if the second person is in a relationship with the first.
The next step you should understand, what you need to do in order to atone for their guilt.

Protection: Keep your own idea of what is good and what is bad. And only by it base your actions. At the end who are the judges?

The image of real man is a powerful psychological lever with which women successfully manage a strong gender. From an early age, women are implementing in the subconscious of boys this control lever.

They are justifying their claims to the child, use the argument: You are the future man. And in case, if they want to encourage the child to use praise: well Done, you've acted like a real man. If you do as we need to recognize that you are a real man. No, do you will be not a real man in our eyes.

For manipulative women it is very convenient to play the weak floor, allowing more strong men take at himself the solver of all problems. But at the same time, every woman wants strong man will perform HER desires and followed HER decisions, but the responsibility for all the consequences took at himself.

Used, typically, in conjunction with a manipulation on the sense of debt and guilt.

Please note that the mere mention of a real man there is a subtle hint of the man that he should seek to realize in himself the women's interpretation of a real man. Thus is formed not only direct manipulative motivation to action but also instilling guilt.

Protection: Remember that a real man is a fiction, a myth, a phantom and standard manipulative technique. Do not be afraid not to fit it.

A lot of people have a weakness for flattery. The art of making direct and implicit compliments is the main weapon in such cases. You can make a compliment to the person to Express admiration for his enterprising spirit, mind, and appearance. Using words in superlative you can praise the work, which he is doing, marking his success in this field.

It is done for ensuring that the man lost their vigilance and sense of reality. If somebody sees, it man strives to meet the expectations or beliefs of himself.

In fact, the woman of Flattery is telling the man, what she WANTS to see him. And if you have not met her expectations, then it may appear phrases such as I thought that you are such, but I was wrong.). Although actually, the woman notices who you really are. And manipulation of flattery she just wants to guide your actions in the desired direction for her.

Protection: if you clearly see that the compliments do not correspond to reality stop attempts to flatter you. If you fall for it, then your actions will be aimed not at what YOU want, but to justify someone's expectations.

Kindness, generosity of soul these qualities are valued as gold, but they are not showered by anyone. And all because these beautiful qualities of human nature people most often use for the most nefarious purposes.

In relationships there are such their varieties as ''you are a generous person, I know it, and only you can help me now,'' ''you can forgive what others can't'' and so on.

Protection: Focus on the equivalent exchange of the resource.

You can pretend to be helpless and weak, to induce a sense of pity and compassion for you, to surround yourself with care and offers of assistance. Feelings of the defender and patriarchal responsibility which are inherent in normal man, just on the physical level, pushing him to the aid of the lady, suffering from «excessive» load. Ladies use it with pleasure.

The weakness and helplessness of women are greatly exaggerated. Actually on average ladies are more much hardy than we are. Nature has taken care to give them an increased margin of safety. But if a woman does not want to do anything, in most cases, she pretends to be helpless. Oh, I can't, Oh, I don't understand, etc.

Pretending she's stupid and weak, the woman shifts all the problems on you, and then it remains to her only to observe, as you are pleased with your superiority, exert yourself for her, such a silly.
Often used in conjunction with the manipulation of your masculinity, feeling of pity and generosity.

Protection: Avoid girls who have more problems than you have.

Most likely you have already met the type of girl “easily offended." Women love to offend. It's a reliable trick to get what they want! And in a relationship with a girl, be sure, you this method will be used more than once or twice.

This manipulation of men is the most standard way. You are implying or openly spoken of his desire, and if you do not run it to perform you get colder or frankly offended. This happens as long as you do not do, what want from you then again flowers bloom. However, it lasts no long until the next whim and subsequent resentment.

It also happens that using insults the woman is forcing you to be advantageous for her model behavior. There is already a real circus: either you do as you dictate your woman, either you get a portion of scandals, accusations and, of course, tears.
Resentment often used in conjunction with manipulation of the guilt. It is one of the ways to make the other person feel guilty.

Protection: Try as soon as possible learn to understand where the resentment makes sense, in other words, you really did something wrong, and where it's just an element of manipulation.

To reliably defend against foreign influence, it is necessary first of all to identify your weaknesses and to recognize the presence of those or other psychological complexes. This would be quite easy, if not to announce them publicly.

To analyze the events of recent months. Did you do all on your own, or fulfill the will of others? If someone manipulated you, try to determine how, through what your psychological complexes. Read also: The relationship between psychology and sociology is intricate and inseparable.

Psychological complexes are those barriers that often prevent to go to the level of consciousness, for which an important parameter is an independence. The faster you understand that you should not meet someone's expectations and to justify them, the sooner your mind will go to a new level of perception of the world.