The description of marriage counselor

By Moh Ghufron 1:49 PM Post a Comment
If the marriage issue happened deadlocked, it might be time for help marriage counselor. Many people have heard of the profession as a marriage counselor. But perhaps few people know what their duties. Marriage counselor takes care of the relationship between husband and wife, especially when there are problems. Initially, a counselor will conduct an assessment and analysis of the issue. Then find the source of the problem, finding a solution taking into account the ability of the individuals concerned, considering the support they might receive, either from the family or in connection with social life and their financial condition. Thus, a counselor will provide suggestions were deemed to be balanced to all parties. Read also: Signs you need marriage counseling.

How to choose the right marriage counselor? You can choose a counselor who at least have a formal education in the field of marriage counseling. Dr. Monty P. Satiadarma, MS / AT, MCP / MFCC, a marriage counselor stating, ''There is no harm in asking the educational background of the counselors are concerned. At least, choose those who participate in education from an accredited university, and it does not hurt to ask the cases marriage ever they handle. Prospective clients have a right to request for accreditation from the counselor in question.''

On whether the counselor is better that a same-s*x or opposite s*x, Monty insists that all depends on the convenience of the users of the service. Monty just said, ''If same-s*x likely obtain the same angle of the same gender. While this does not constitute a guarantee because it is a counselor must act objectively and not based on s*x differences.'' 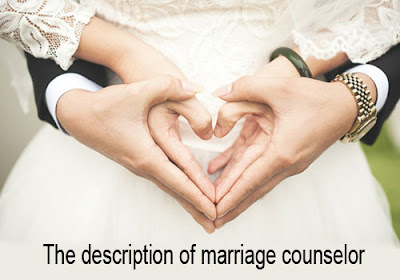 Find the best solution with the help of a marriage counselor is commendable. As well as referees who are outside the field, the counselor can provide a solution with a clear attitude because they are not involved directly in the field. However, like any healing process, no one can guarantee the therapeutic method. So even on the consultation marital problems.

More important is to seek the best. Reverting again to each of the parties about the nature of marriage so that can minimize every conflict if each party would back the value of commitment. Importantly, the counseling session will be useful when couples are also invited to participate. Proverbial all out so that each party knows what must address. If delayed, the risk of disintegration likely to occur.

The purpose of counseling

If you feel that the relationship has led not harmonious, the husband and wife should be mutually open them to improve the condition of marriage. If unable to resolve itself, immediately do counseling to agency or person who understands the problems of marriage. Better to do counseling before deciding to divorce. Read also: The importance of counseling to overcome marital conflicts.

As well as expert consultants, of course, there is a price that you must pay for a counselor. This fee depends on the condition of the counselor. Generally, for a meeting to be according to the agreement. When private practice, generally no longer subject to administrative costs. Different when the counselor joined in an institute of psychology/counseling agencies. The fee usually is paid per session that the hours have been agreed or determined.

It's cheaper than divorce

The title above seems striking, but this is the appeal of the Planned Parenthood Federation of America (PPFA), institutions that care about the household. The Institute is concern that 50% of married couples, eventually led to divorce. In fact, the divorce would be painful for anyone, including children and large families. If calculated, marriage counselors rate much cheaper than divorce.

Imagine, if you divorced, many things must be sacrificed. Apparently, the time to commute to the courts in the fight over property and custody of children. Not to mention undergo new status as a widow or widower may cause a reaction of the environment. Costs not just stop up here. Divorce usually causes multiple effects, such as children suddenly become naughty. It was because of lack of affection or declining quality of family life and divorce always cause economic impacts.

So, most couples in the conflict in America indeed being led to a session in the counselor before quickly say divorce. To help the couples, the government of each state in the US have the same competency standards for each marriage counselors to have the capabilities of a powerful and up to date.