9 Embarrassing moments for guys when the first date

By Moh Ghufron 9:39 PM Post a Comment
A relationship must first begin with stage approach. This is certainly intended that each can learn more about the character and personality of each other. When the first date with your potential partner, of course, it will make you become nervous, and so are actually perceived by her. Feeling nervous on a first date can sometimes make a guy unwittingly become strange to perform embarrassing acts. Perhaps you've experienced it. When you've experienced it, then you need not worry because the actions were accidental that generally occur for those who make the first date with a potential partner. 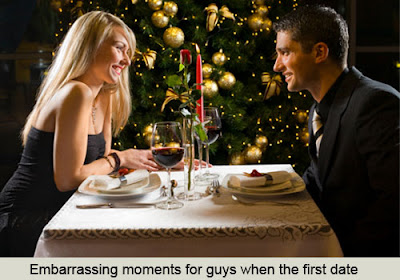 (Read also: How to seduce a girl without touching her)

Here are 9 embarrassing moments for guys when the first date:


However, it was based on the results of the survey, 56 percent of girls said that they would go on a date for a second time with the same guy. For them it is a matter that is understandable because not based on deliberate but because they inadvertently. In other words, many respondents had looked at some of these embarrassing things become a thing that should be given tolerance and understand. Thus making them continue dating for the second time against the same people who have had a moment which is considered embarrassing.

Luke Pomaro, founder of online dating sites DateWithaMate.com who conducted the survey said, ''Hearing these funny stories would make us chuckle. Almost everyone has experienced the most embarrassing events in life.''