Why are we so difficult to apologize?

By Moh Ghufron 10:48 AM Post a Comment
Why is it so difficult for some of us to apologize even when we know that our actions were wrong? If you do not know the answer to this question, then you should read this article until the end. No one in this world who never made a mistake. We all make mistakes in our lives. As human beings, there are times when we make bad judgment and wrong decision. There is no way to escape from this reality.

Nevertheless, there are still people who find it very difficult to apologize. For them, apologizing would undermine their self-esteem. Conversely, people who believe themselves would admit their mistake because the recognition of such errors will not affect their self-concept. Although they have done wrong, they are confident that they are able to correct the mistakes and do better in the future.

Imagine if your child does wrong then he sweetly apologized as soon as he realized that he was wrong. You will surely melt and feel not the heart to scold him. A small child knows that mistakes will not damage the relationship between he and his parent or his parent think about him. We can all take a lesson from the little boy that a mistake does not define your character so do not be afraid to apologize if you have to do. 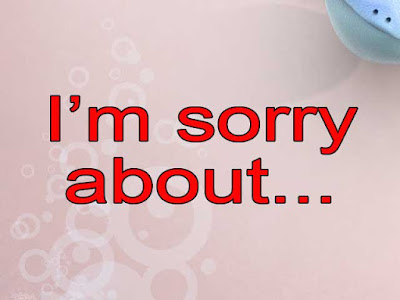 People who are able to apologize after making the mistake of having a strong self-concept and a great moral responsibility. They do not worry that others will think less of them if they apologize for their mistakes because they are not going to look down on themselves. They will not feel that by apologizing, the other party will have the upper hand. Because they are not worried about getting, lose, or maintain a fixed position above the wind.

Apologized for the mistake you need wisdom. By apologizing, you can prevent things worse. An apology is not said to be "hanging" in the air and cause discomfort. Sometimes, a simple apology can bring wonders for your interpersonal relationship. If the party you are apologizing refused to forgive, then at least you have been freed from the burden. If you currently have a problem in your relationship with someone, it may take an apology for the sake of making the relationship healthy again.