Manipulation in marriage can destroy you

By Moh Ghufron 6:33 PM Post a Comment
Have you ever tried to manipulate the situation in your marriage just to search for your own profit-making? Although it may provide temporary enjoyment, long-term consequences of such manipulation can destroy a marriage.

At one time, we all might try to use manipulation to our mates. The level of use and manipulation of results may vary. Although generally manipulation is a rare occurrence in the wedding. But some marriages built on manipulation. '''If you like this, I would be so'''. Or "If you give me this and that, I will do this and that". This is not a form of bargaining, this is clearly manipulation!

If you do not believe, let us delve a little deeper into the meaning of the word manipulation. According to the dictionary, one meaning of manipulation is controlling or playing someone with a cunning way and unfair for its own benefit. 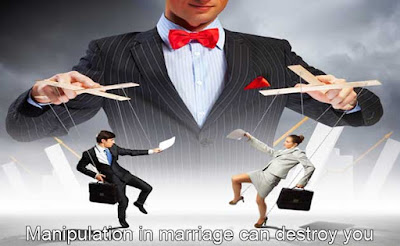 So let us consider a few things about these explanations. The first is that the manipulation is often based on control. A healthy marriage is a marriage where the husband and wife are not mutually controlling each other.

The second, the existence of injustice. No one wants to be treated unfairly in their marriage. While the manipulation is done for the benefit of the manipulator itself. In other words, good or advantage to their partner is not considered.

Sometimes, people consider manipulation as a joke in marriage. But actually, the manipulation is not a laughing matter. Beware ... Perhaps you mean kidding. But you do not know that in fact your partner feels harnessed and treated in inappropriately.