The story of Cupid, the god of love

By Moh Ghufron 11:13 AM Post a Comment
Cupid is the most famous symbol of love. His form is in the form of a boy armed with a bow and arrow that pierced to the heart. The arrow indicate the desire and emotion of love, and Cupid direct arrow to God and Human so that they fall in love. Cupid has always played a role in the celebration of love. In ancient Greek culture, he was known as Eros, son of Aphrodite, goddess of love and beauty. In Roman culture, he called Cupid, and his mother was Venus.

There is a very interesting story of Cupid and Psyche, a lover of Cupid in Roman mythology. Venus was jealous of the beauty of Psyche, and ordered Cupid to punish Psyche. But instead, Cupid fell in love with Psyche. He proposed Psyche to be his wife. But as a human being, she was forbidden to look at Cupid directly. 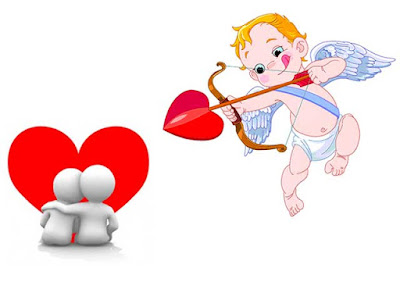 Psyche is very happy living relationship with Cupid, until her sisters persuaded him to look at Cupid. As soon as Psyche looked at Cupid, Cupid punished by leaving him. Beautiful castle and garden vanished too. Psyche found herself alone in an open field with no sign of any other person or Cupid. As she walked trying to find her lover, she arrived at the temple of Venus. Venus the goddess of love want to get revenge on Psyche. She gave series of tasks to Psyche are very difficult and dangerous.

As a final task, Psyche was given a little box and told to take it into the underground world. She was ordered to take some beauty Proserpine, wife of Pluto, and put it in the box. During the trip she was given tips to avoid the danger of the underground world. She also warned not to open the box. But Psyche finally could not resist the temptation to open the box. But instead of finding beauty, she found deadly sleep.

Cupid finding Psyche lifeless figure on the ground. She slept deadly of his lover's body and put back into the box. Cupid forgave him, as did Venus. The gods, moved by Psyche's love to Cupid and Psyche was appointed as a goddess.

Currently, Cupid and his arrow has become a very popular symbol of love and love is very often denoted with two hearts pierced by an arrow, the arrow of the Cupid.