Is it true that polygamy can extend life?

By Moh Ghufron 11:37 AM Post a Comment
For those of you who want to live longer in the world, try to polygamy. Polygamy may be a case that is still very taboo in the traditional culture of a country. But do you know the new research shows that men who commit polygamy, have an average life of 7 years longer than men were monogamous.

Polygamy, also known as a relationship where the man had more than one wife. Although it is still taboo, but polygamy is still a hot topic in the formal and informal discussions because it touches on the values of ethnic and spiritual. Due to the alarming divorce rate and fraud such as infidelity in couples, so people consider polygamy as something feasible.

Research on this subject has been done by Virpi Lummaa, an ecologist at the University of Sheffield, UK. Virpi Lummaa conducting comparative research in a sample of men aged 60 years and older who came from 140 countries that practice polygamy to varying levels of life, the man who came from 49 countries are monogamous. Research shows that after accounting for socioeconomic differences, men aged over 60 years who commit polygamy has a 12% probability of living longer than men who do not practice polygamy. 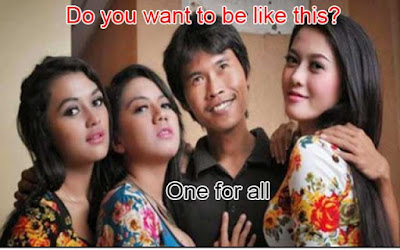 Have many wives make the men gain more care, attention, and affection. It is believed that Chris Wilson, an evolutionary anthropologist, which can make men become happier and younger.
Besides being able to make your life longer, polygamy can also enhance social stability. Nowadays, many of the husband and wife quarrel, that led to the woman was left without any means to support themselves. Men have a responsibility to marry many women and reduce poverty and to rebuild communities.

Polygamy is also the key in order to man remain faithful. Of course, have many wives can reduce the probability of men glance at another woman. Even if it is really interested in another woman, he could direct the woman to make a plural wife. Polygamy reducing cases of infidelity in the household. This means that a husband and wife have a sex life that is transparent.

Actually, theoretically, polygamy is not a bad idea. But certainly not as easy practice theory. It should be noted that men who commit polygamy must be fair to all wives owned. Give attention, time and affection in equal portions to each other.