14 Signs he had an affair

By Moh Ghufron 10:54 AM Post a Comment
Do you lately feel that there seems to be something changed in your relationship? Do you feel your boyfriend does not love you anymore? Is he having an affair? In this article you can find fourteen signs that you can use to find out if he was having an affair:

You have a gut feeling that something is odd. Maybe because your boyfriend no longer giving an intimate gaze and a sweet smile when you meet. Never ignore your instincts regarding fidelity boyfriend.

If previously he had never bought you a gift and then suddenly in the last month have you received so many gifts, it could be because he felt guilty for having betrayed you and as compensation, he gives you a gift.

If there is someone who lately often condemned by your boyfriend, it could be that person is your boyfriend affair. Your boyfriend reproach of course that you do not feel suspicious of his secret lover.

4. He does not miss you at all

He did not seem to miss you at all when you are not with him. Whereas before he used to call you five times a day or two of you meet almost every day. Now he hardly ever calls you.

Sometimes when you call him, he let the phone ring or reject your call. Then he gave convincing reasons.

6. He became more coarse or quick-tempered

He looked annoyed all the time. Whatever you do seems to make him angry. He was rude to you all the time on trivial matters.

He recently earned a 'Mr. Moody'. Today he seems to be very dear to you and give a special gift. Yesterday he did you cry with his violent words about something completely unimportant. Although you may be surprised by changes in mood, it is a common effect of infidelity. When he felt guilty for having betrayed you, he'll be super sweet. But at other times, he will feel annoyed at having to stay with you when in fact he does not love you anymore. 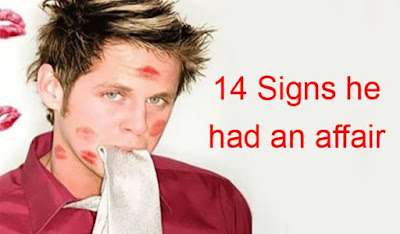 8. No more compliment for you

In the past, it usually staring at you with eyes bowled for 10 seconds and leave a comment that he is the most fortunate man for having had the most beautiful woman in the world as his girlfriend. But lately, he never again praising you.

In the past, you had both open and do not keep secrets from each other. You both regular email open in front of each other and leaving open an email account because you both do not hide anything from each other. But now, when you find it open the email, he hurried to shut it down and talked at length about individual privacy.

In the past, maybe you can say "Give me your phone, honey. I want to check what you have a girlfriend than me". After checking his phone and found a text from parent and friends, you both will laugh together. But now, his phone into a 'fortress' that you should not touch.

12. Excessive reacting to your question

Example, if you call him and ask "Hi, honey! Where are you now?" or "Yesterday we're not finished watching because you are busy working. So how is the progress of the project, honey?". He became very defensive and angry because he thinks you are too suspicious of him.

13. Alluding on the topic of "breaking up" in conversation

When you quarrel, he often alluding to end the relationship, not like before. One day when you make a small mistake, he might say, "If you repeat again, we better break up!". He dared to challenge broke up because... first, he had not loved you anymore, and secondly, he has had a reserve girlfriend.

Do you remember when the last time he said "I love you" to you? Yes, he never said that sentence again, as he no longer is staring at you with tenderness. Lately, it seems that he is near you, but do not really exist. Emotionally it feels very far away.

If you find at least five signs above, then you should be suspicious that he's having an affair. Should immediately invite him to speak from the heart so that everything is clear.